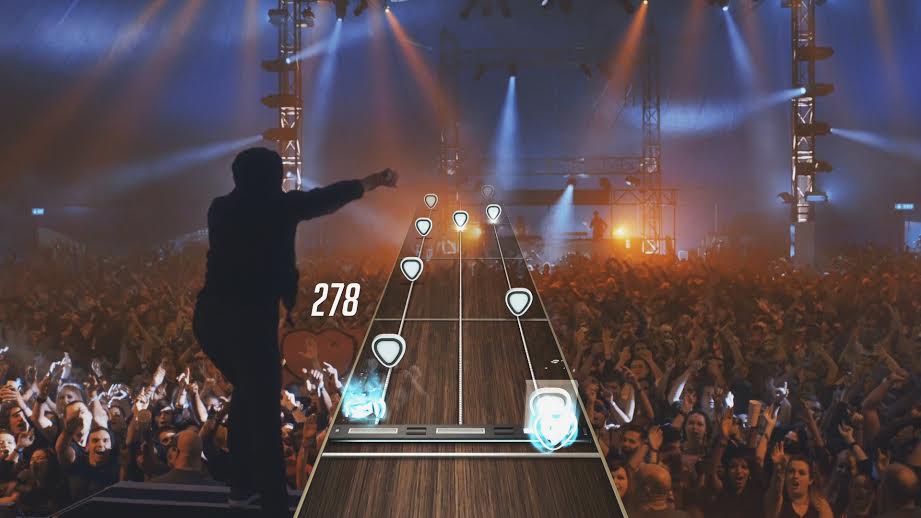 Rhythm action games are special to me. So let’s have a look at some well-known, and not-so-well-known examples and see how they address the question of difficulty.

Rhythm action games were the first type of console game that I picked up and taught myself how to play. My first experience was with the original Guitar Hero game (Harmonix/RedOctane, 2005). Back in 2006(ish), my video game loving flatmates bought Guitar Hero, and I spent many evenings watching them play it (and if I ever hear No One Knows by Queens of the Stone Age again I may kill one of them). One weekend they decided to go away and leave me alone in the flat, and through a combination of drunkenness and fear of going to sleep in an empty house (there were rats in the ceiling!), I chose to sit up all night and teach myself how to play it.

Now this was a game with a well designed learning curve! Starting on easy, you only have to play with the first three fret buttons (green, red and yellow), with the songs getting gradually harder as you work your way through the set list. Now, although I am rubbish at video games, I do have (a little) musical heritage, so the concept of pressing stuff in time with the music was not new to me, and I quickly progressed to the blue and orange notes (should I use my pinky for blue, or move my hand for it? A conundrum for the ages). By the time I came to play later games in the series, I only played them on expert.

Strangely, having achieved expert status, I actually find the easier difficulties more difficult than they were to begin with.  This may sound strange, but I think it is because on expert, you are pretty much playing all the notes. However, in order to make the other difficulties easier, they strip back the notes you play, and it isn’t always intuitively done.  I’m not sure if any of the companies involved in these games thought of this, but whilst the easy difficulty setting is great for accessibility, it is far more immersive experience to play on expert. Perhaps most games are like this, but I don’t get passed easy in most games.

Despite the fact that this rookie plays Guitar Hero on expert, I have to admit, that I’ve never finished a career. I remember quite vividly that in Guitar Hero 3 (Activision/RedOctane, 2007), I couldn’t get passed Before I Forget by Slipknot and in Guitar Hero: Smash Hits (Activision/RedOctane, 2009), it was Cult of Personality by The Living Colour. However, despite this, many of the games offer other modes, which allow you to forget your ineptitude and enjoy the songs. For example, some of the games have co-op modes in which one of you can play bass or rhythm guitar. This means that many a time I have been able to rock out to One by Metallica, whilst getting a more skilled guitarist to play the lead part. As you share star power in co-op mode you really feel like you are supporting each other, and in particularly hard songs you have to make tactical choices as to who uses star power when. Singing and drumming are also options in the later games, oh how I do love belting out Through the Fire and Flames by Dragonforce, even if my neighbours don’t appreciate it. If you’re wondering why I’m not talking about Rock Band here, it is simply because I don’t like it. So stop it.

The newest version of Guitar Hero, Guitar Hero Live (Activision/FreeStyle Games, 2015) has come as a bit of a shock to me. After more than 10 years they have changed how it works. There are (shockingly) now two strings, each with three frets, and it turns out, that to play chords you actually have to use more than one string (!). The commitment required to make this adjustment is high,  muscle memory is out the window and I haven’t yet learned to play on expert, but I’ll let you know when I have.

A more recent addition to the rhythm action catalogue is the thoroughly charming Voez (Rayark/Square Enix, 2016), which although initially a mobile game, is now available to play on the Nintendo Switch.  This game features a seemingly limitless number of songs you’ve never heard before, ranging from J-pop to classical piano and everywhere in-between, some of which can be sampled here:

As you’ll see in the video (except you won’t as the person playing the Switch, in this instance, is invisible), you are presented with a variety of note types on the touchpad, that ask you to carry out different actions – a tap, a swipe, a held note, and whatever it is you do for those little white squares (I haven’t figured this out yet so if you know please tell me!). There are three difficulty settings: Easy, Hard and Special, and you are given a ranking C-S (there might be a higher one, but I’ve never managed it so I couldn’t tell ya) based on points accumulated via note streaks and hitting notes perfectly. The idea of hitting notes perfectly was an odd one to me, as in Guitar Hero you pretty much have to hit everything perfectly, there is no leeway, so I’m not quite sure how this works, but I’ve certainly never perfected a song.

At first I just messed around with it – playing songs I liked (Shamisen Drives the Wind by Kitkit Lu is my fave – is it just me or am I cooler when I’m listening to J-Pop?). However, being a Guitar Hero aficionado, I decide that easy will be too easy and skip ahead to hard, which is where my problems begin! I play through several songs I’ve already done on easy, but end up only being able to get C’s. I didn’t really notice at first, I’m not all about the scores, but after a while you realise you’re not actually very good. So on a day I had some free time (no, I WAS NOT skiving off work), I went back to easy, and discover a nice feature that allows you to sort the songs by grade of difficulty (from 1 to 15 or something like that). This wasn’t originally how the songs were ordered, but doing it like this encouraged me to find a level I could do well, and try to beat my scores.

Playing this way, you can track your improvement, which I’d previously found difficult as it employs a mechanic I was not used to – no fail mode. Some versions of Guitar Hero do employ a no fail mode, and you would perhaps think that a video game loser such as myself would find this a blessing, however once you’ve played it properly I found no fail mode very unfun. However, the fact that Voez  is entirely no fail is welcome, it lends the game a more relaxing vibe and makes it playable on a busy commute (it also doesn’t make that awful twangy noise when you miss a note!).

Rhythm action games aren’t only about streams of notes coming towards your face, they can in essence be all kinds of games. The aforementioned musical levels in Rayman Legends are a good example of how rhythm action can also be a side scrolling platformer. Old-school title Vib-Ribbon (NanaOn-Sha/Sony, 1999), provides never-ending procedural generation of a line drawn rabbit, and PaRappa the Rapper (Sony, 1996), well, I’m not really sure, but it was recently described by The Guardian as a “heartwarming tale of a paper-thin canine rapper who is taught the meaning of life by a karate-chopping onion”. (Video Warning – If I’d made the official trailer for the re-release it wouldn’t have featured any of the people you can see below, but sadly, they never asked for my input):

So, are there any rhythm action fans out there? What’s your fave? Are you more Rock Band than Guitar Hero? Maybe you prefer your rhythm a bit more action, so Dance Dance Revolution perhaps? Then of course there’s that 3DS game where you get to be chibi versions of your favourite Final Fantasy characters…actually that one probably has the best soundtrack! Let me know below.