Thank you for joining me today loyal readers. This is just a quick update but I hope it will be of interest, as today is the day when the winners of last week’s Gaming Catwalks will be announced. Try and keep you’re excitement in check. IF YOU CAN! *Maniacal Laughter*.A week is a long time in the fashion world, but it was then that me and Chris from Overthinker Y hosted the most glitzy, glamorous video game fashion event ever. If you missed the shows, well, where were you? It’s too late to vote now, but you can still go and have a look at them:

Votes have been pouring in over the last week (kind of pouring, maybe more trickling, but they have been coming), and now I’m particularly excited to be announcing the winner of my show. Chris is announcing his winner today too, and the tension couldn’t be higher in his competition so go and check out WHO WON! 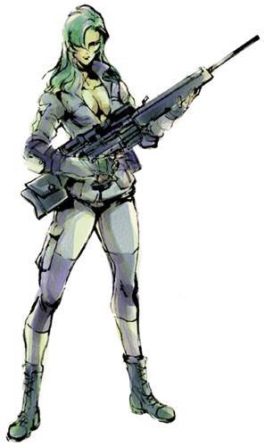 But who would triumph in my battle of style and chic? Could it be the ice-cool killer, Agent 47, or perhaps the sassy sniper-wolf? Maybe it would be the gallivanting Gambler, Setzer Gabbiani, perhaps the accessorized attorney, Athena Cykes, or the boutique bounty hunter, Samus Aran?

This was clearly a difficult decision for you, I mean who would have guessed that the world of video games contained so much style? Not only that but it has been a tough time for our competitors too, waiting anxiously behind the scenes in anticipation of the big reveal.  Setzer seems to have taken a  bit of a shine to both Samus and Sniper Wolf, although they don’t appear to be reciprocating. Agent 47 is mostly keeping himself to himself, but I’m pretty sure he is freaking Athena out. Someone from an old case perhaps?

But let’s not get too distracted with the goings on behind the scenes, let’s get down to the business at hand. So, *Drumroll Please* without further ado, I can confirm that the winner of Pix1001’s leg of the inaugural video game fashion show – High Score Haute Couture is:

But wait a second! We didn’t actually have an overall winner in the poll! There was too much style on show. The casual chic of Athena and Samus’s power-suit couture just couldn’t be separated. An experienced fashion show organiser should have a contingency plan in place. HOWEVER, I’m more style than actual organisational skills so an emergency meeting with the event sponsors and Chris from OverThinker Y was called, and we came up with the idea of giving Twitter a vote:

And so, after all of this absurd faffing about, I can now announce that thanks to the magic of Twitter the winner can now be revealed…*another drum roll please*

SAMUS! Thank you so much to David @dxmthemachine for casting the final vote – he’s a big fan of Samus! If you’re a Twitter type of person then go and give David a follow!

Anyway, back to proceedings, and I hope you would agree that this is a great day for video game fashion and Samus can feel very proud of her performance.

Samus, would you like to say a few words? No? Maybe just a quick twirl for the audience? A phazon blast maybe?

This isn’t the last we’ll be hearing from the super stylish Samus. She will be taking to the catwalk again a week today in a show stopping face-off with the winner of Chris’s show. But who might that be I hear you cry? Well, you’ll need to go on over to Overthinker Y and have a look! Remember, we will be swapping characters for the FINAL SHOWDOWN, so if you particularly like Samus, then Overthinker Y is the place to be!

Thank you for reading, voting and taking part, you have been an excellent audience so far! I look forward to welcoming you back to the greatest-video-game-fashion-show-on-earth this time next week. Get Friday May 11th in your diaries!