It’s that time again! Yep folks, it’s time for a Top 5. For July, as you may have guessed from the title, the Top 5 is all about video game princesses. We like to do a Top 5 every month here at Shoot the Rookie, so why not join us to see who we’ve picked for this one.

Princesses do sometimes get that kind of treatment, and may still hold that perception in some corners of the universe, but in the world of video games, we are shown again and again that princesses are humans after all (sometimes other species) and thus we are presented with a great range of options for this Top 5.

So let’s take a look at who made the cut!

Zelda (The Legend of Zelda Series)

Despite the fact I didn’t include Link in my Top 5 Heroes list, because well, he’s a bit of a jerk, Zelda has developed into such an interesting character throughout the Legend of Zelda series that she was an easy choice for this list.

For me, Zelda shines because despite her meekness and sometime lack of self-belief, she still comes through every single challenge and proves to us that she is a real leader. Not afraid to seek the help of others when she needs it, Zelda approaches her destiny pragmatically. Whether she is making the most of her excellent cosplay skills as Sheik or Tetra, or travelling the whole of Hyrule to awaken her fabled powers, Zelda is a determined character who simply will not let evil win, and in my book that is worth celebrating. 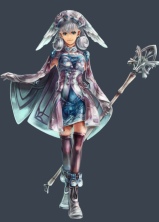 What? You didn’t expect a character from Xenoblade in this list? You may be sick of me rambling about the epic JRPG series* but stick with me on this one, because Melia is awesome. She is one of my favourite characters from any game, and just so happens to be a princess.

What gets Melia onto this list is her depth of character. As heir to the throne, she is completely dedicated to her people but yet still has that spark of independence, that hint of youthful inquisitiveness (despite her apparently being like 80) that is sometimes driven out of royals at a young age.

Despite her occasional naivety, she faces tragedy with her head held high and when the time comes for her to be crowned empress she maintains a regal demeanour (in public at least) despite being faced with violent opposition to her rule.

Melia’s is a story of tragedy, and the feeling of sadness that underlines her is always there, despite the strong friendships she forms and the happiness those relationships bring her. Even at the end of the game’s story, it is difficult to see a truly happy life for Melia, but you know for certain that she will never give up.

The word ‘tragedy’ seems to be a theme which links many of these princesses together, and our next princess, Ashelia (better known to most as Ashe), is no exception.

Having lost her kingdom, her father and her husband to the ruthless Archadians, she could have been forgiven for giving up hope, but instead Ashe bides her time, living in disguise before eventually meeting the games’ other protagonists and grasping the opportunity they present.

Faced with physical, political and emotional trials she shows both strength and wisdom to win back her kingdom, and yet the element of Ashe’s story I find the most interesting is the moral dilemma she is faced with in doing so.

Princesses may sometimes be portrayed as pure of thought, but the story see’s Ashe’s thoughts and decisions stray to darker places, even if she eventually rejects the choice that would guarantee her success in favour of a decision she can morally live with.

So some of these princesses are not afraid to show their physical strength on the battlefield, and the best example of this has to be Princess Kasumi.

The interesting thing with Kasumi is that although she starts the DOA story (it does have one, I promise), as the second in-line to the throne of the Mugen Tenshin clan, she quickly throws that away and turns her back on her heritage by fleeing the clan in order to avenge her brother who had been left comatose after a battle with their uncle Raidou.

She faces a long (and often bewildering) journey to achieve her aim, but it is this dedication to her brother which gets her included here, as she, unlike most of our princesses, puts her love and respect for her brother over her responsibilities to the tribe as a whole. For her at least, family comes above her royal position.

Estellise (or Estelle if you’re a commoner) is the most obvious example of a ‘traditional’ princess to figure in this list. Just look at that dress and her super-cute and innocent expression!

She has spent many years locked in a palace, learning only of the outside world from books. That all changes when she meets a chap called Yuri who is attempting to break out of the palace where she lives. She enlists his help to find her friend Flynn, but to find him, she must accompany Yuri on his journey.

After leaving the palace she is forced to apply her academic knowledge to the real world and things don’t start out too well for her.  At first she won’t even kill monsters because, wait for it… she feels sorry for them, but these new experiences open her eyes and she learns how to harness her fighting powers. She faces many challenges along the way and has to face some harsh realities about her seemingly idyllic home land, but I think the real thing that stuck with me about Estelle, is how she changed from a naive little princess into someone who understood the true nature of people and the levels of good and evil that they can be capable of, including herself.

So what do you think of my choices? Are you now screaming “WHERE’S PEACH?!?” at me? Which video game princesses would make your Top 5? Let me know in comments, and let me know if you have any ideas for future Top 5’s (but don’t say Princes…ugh).