Hello readers and welcome to my response post to a question set for me by Ian from the Adventure Rules blog as part of his marvellous community collaboration event – Charming and Open.

Just in case you don’t already know about Charming and Open, let me briefly explain. This is an awesome event where Ian invites other bloggers to ask him a question which he will then answer on Adventure Rules. In return, he gives you a question to answer on your own blog. Since you don’t know what you’re going to get asked, this is a great way to get the creativity flowing so I highly recommend getting involved.

Before reading my answer to the question Ian has set me, I suggest you go and take a look at Ian’s answer to my question, which was all about virtual reality!

So then, what fiendishly difficult question has been posed? Well, Ian wrote…

I know you’re a fan of both JRPGs and anime, so is there a video game you’d love to see as an anime, or vice versa? And how would it change in its new form?

He is of course correct in his assertion that I am a fan of both JRPG’s and anime, and what is really interesting when approaching this question is that there are already a lot of anime/video game adaptations out there. I’ve recently watched anime shows of Ace Attorney, Devil May Cry, Final Fantasy XV and Persona 4 Golden for example, and I also watch Sword Art Online which has a number of video game spin offs. The last time I answered a question as part of Charming and Open I wrote about the Tales of… series, but it also has a number of anime adaptations (I REALLY need to get my hands on that Tales of Vesperia film, if only for puppy Repede♥). So the trick of the question is to find something which hasn’t already been adapted but would be well suited to an adaptation.

I spent a considerable amount of time thinking about this. I made a list of both animes and games that I thought might fit the bill, and yes, I nearly went for a Xenoblade Chronicles game, but in the end my choice to get an adaptation is… 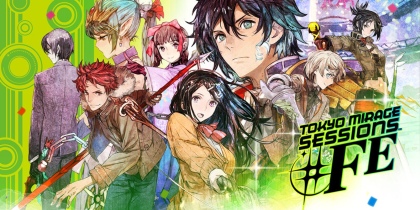 What is it about the slightly bonkers idol-themed JRPG crossover that would work well as an anime? Well, everything! Let me explain…

Tokyo Mirage Sessions is a crossover between the worlds of Shin Megami Tensai and Fire Emblem. It features many characters from the Fire Emblem series, but also introduces an entirely new cast. The story revolves around 7 teenagers who want to become ‘idols’ by forging careers in music, acting and modelling. The central character in the game is Itsuki Aoi, a guy who doesn’t know what field he should focus on so instead spends his time helping his friends develop their own careers. Oh, and there’s some evil force trying to steal ‘performa’ (peoples creative ability) from the whole world and our characters must stop them with the help of companions called mirages who are living weapons and just so happen to be characters from Fire Emblem. Confused? Me too.

The way I see the anime is working is that each episode would feature Itsuki alongside one or two of the other main characters. The game has a host of side quests in which the other characters get opportunities to develop their careers in often hilarious ways. Itsuki is ever-present and he helps them out in a variety of ways, ranging from taking one of them on a series of pretend dates, to tracking down particular flavours of doughnut, to searching for a missing cuddly toy. I think he even has to help someone with a hangover at some point. Each of these side quests would work well in anime, and one could be featured per episode alongside a bit of main story. This would work as a good character development tool leading up to a final story arc where they all band together to save the world.

It may be a bit greedy, but the great thing about anime is that it can (if you’re lucky) keep going and going. Tokyo Mirage Sessions #FE ends in a completely reasonable way without any real loose ends, but also without completely ruling out the idea it could be continued. Therefore I’d like to see the story continued in the anime. They would of course have to come up with another scenario in order to make this work, but if you draw from the worlds of Shin Megami Tensai and Fire Emblem a bit more, I think something really good could come out of it.

Another thing about the show which makes it work as an anime is that it features lots of singing and dancing. Idol shows are really popular (or at least prevalent) at the moment, and with the addition of the more fantastical elements of the game, this would make for a great twist on an already popular genre. With music being a central part of the game, the anime would serve as a fantastic opportunity for more excellent songs to be written and for the animators to create stunning performances.

Speaking of stunning performances, this game would actually make a really good looking anime. The locations in the game are split between modern day Tokyo, and the ‘idolosphere’ or ‘illusory realm’ which is basically an other-worldly version of the real world. This would mean that the animators could use a lot of creativity in coming up with new locations. Battles within the game all take place in the idolosphere and the fighting mechanics are turn based, which is something that would need to be translated as a turn based system would be difficult to recreate. Due to the wide variety of fighting styles though I think it would look explosively awesome. There have been a fair few animes recently set in modern Japan, but with the addition of the illusory realm, Tokyo Mirage Sessions #FE: The Anime would have a cutting edge in terms of design.

Finally, I’m going to admit to something embarrassing. I’m a bit of a sucker for in-game romances, and despite not having a real romance, Tokyo Mirage Sessions #FE is a shippers dream come true. Therefore in the anime, I really want to see some romances, including the resolution of who the main character Itsuki would end up dating. Not that I have anyone particular in mind…

OK I do but I’m not telling.

So what do you think? Is this an anime that you would watch? Maybe you’ve not played the game but want to know more? Let me know your thoughts below and don’t forget to check out Ian’s answer to my question over at Adventure Rules.

6 thoughts on “Charming and Open Response: A Video Game Adaptation”