Hello readers and welcome to this birthday edition of Shoot the Rookie! My little blog is 2 years old today so I just wanted to do a quick celebration/analysis of the last year. I hope you’ll join me for the fun and festivities!

No, not for you! For me! Last year I bought myself a paid WordPress plan and this year real-world-alter-ego-me decided to treat internet-alter-ego-me to a spa package with a beauty treatment. Yes, that’s right, Pix has had a make-over thanks to the absolutely wonderful artist RinNokuno! Hope you like her…

Now on to the proper stuff!

Year two of Shoot the Rookie has been a bit of an odd one with significant ups and downs. Whilst the first year was pretty much plain sailing, year two has been a mixed bag. It was pretty much fine until May 24th 2019, but then it all just stopped. I haven’t posted a single post since then. The good news now though is that I’m back! I hope none of you lovelies will hold my self-imposed absence against me.

Apart from that weird period of no blogging at all, loads of really awesome stuff happened in the Blogosphere in the past year and I’m really proud to have been a part of that. So what have I done since August 1st 2018? Well, I started the year off by sitting as a judge in award-winning blogging competition Blogger Blitz. If you don’t know about it then you really should, so calmly make your way over to Adventure Rules and find out more! That was a really fun thing to do and it was a pleasure to read each and every entry by a group of immensely talented bloggers. Speaking of which…I might just be competing in this year’s event…but more on that later!

I’ve also been involved in a number of other community events and collaborations in the past year, kicking off with what is probably the most spectacular collaboration I’ve even seen – The Games That Define Us – organised by the fantastic Normal Happenings. For my part, I wrote about the game Guitar Hero and its impact on me. If you’ve not done so already I’d love you to check it out, it is a piece which means a great deal to me.

Next up I was chuffed to bits to get another Question of the Month competition win under my belt in November, with a piece on why of all games in existence I would pick Civilization VI as the game I would play for the rest of my life.

In December (and January) I took part in a totally epic community collaboration organised by the wonderfully talented Athena from AmbiGamer, called The 12 Days of Blogmas. I’d never blogged for 12 days in a row before (and most certainly haven’t since), so this was both super fun and quite challenging. If you missed any of my answers you can check out the full list here!

Early 2019 was quite quiet on the community collaboration front and it took me a while to get back to blogging proper after Christmas. I was still busy behind the scenes though and in January I launched a new monthly (uh huh…)  feature on the blog called My Favourite Series. If by any chance you missed this, don’t be too alarmed as there have in fact only been three of these published so far! You can start catching up now by heading over to this one about Resident Evil, or this one about Monkey Island, or even this one about Xenoblade Chronicles. Part 4 will be on its way to you soon…I promise.

Another new feature on the blog has been that I’ve branched out from video games and am now doing occasional features on anime. I’ve always been a big anime fan so it just seemed to make sense to write about it. I started by revealing my Ten Favourite Anime Shows, so go check it out and see if any of your favourite’s feature!

The most recent and probably most exciting and fabulous and wonderful thing that I’ve done this year is of course Blogovision! This was me and OverThinker Y’s attempt at translating the entertainment monster that is Eurovsion into something that the video game blogging community could get involved in! If you missed this (where were you exactly?) then you DEFINITELY MUST check it out right now! Here, I’ll even give you a link to my version of The Final.

What? You want to know who won?! Well make sure you check out Chris’s fabulous results post! It was a pleasure as always to work with Chris on this and it was wonderful to get a few more people from the community involved as well. I for one hope this isn’t the last time that the Blogging Masters of the Fabuloussness collaborate on such a thing.

So! That was the year that was. But what’s next? Well, as I mentioned above, on August 19th I’m going to be submitting my first round entry in Blogger Blitz: Shipping Wars. Yes. You read that right. This year’s Blogger Blitz involves character shipping. If you know me well, particularly if you’ve known me since I was 15, you will know that I am very fond of shipping characters, so this was a dream come true for me as now I can write about it without being horribly embarrassed. 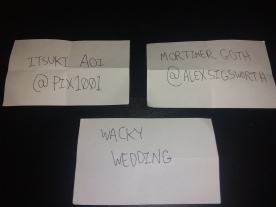 The character that I’ve chosen for this is the affable and immensely patient (but also REALLY POWERFUL AND AMAZING) Itsuki Aoi from Tokyo Mirage Sessions #FE, and I’ve chosen to ship him with his BFF (in my head at least), Yashiro Tsurugi. I know many of you aren’t too familiar with the game but I hope you’ll enjoy what I’ve come up with for the first round *winks*. The event I’ll be writing about is called Wacky Wedding, and is sure to be a lot of fun! But why oh why do I always end up writing about weddings? Anyway! Join me for that on August 19th.

After that I’ll be carrying on with my standard posts, like My Favourite Series and writing more about anime, until the next big collaboration comes around…

…and that collaboration will be The Characters That Define Us. That’s right, Normal Happenings is at it again, being all positive and amazing and inclusive and stuff, and he has got (approximately) ten thousand bloggers signed up to each write about the video game character that defines them. For reasons that now escape me I’ve chosen to write about a total knucklehead called Reyn. I’ll leave the reasons for that choice up to you to ponder until it’s as-yet-unknown release date in 2020 (?!) and in the meantime I’ll actually write it!

So. That is pretty much that. Before I leave you with some pointless stats I just want to say a HUGE thank you to everyone who has read, followed or commented on the blog this year. I can’t wait to get back into a regular blogging schedule and it is you guys that drive me on. Before I go as well, just a quick but heartfelt shout out to my partner who helps me so much with this – thank you for all your help and ideas this year and particularly your recent insistence that I should get my finger out and start blogging again x

As always, thanks for reading – here’s to another year!

Random Stats from the last 12 months:

Post with LEAST likes: My Favourite Series, part 2: Monkey Island. LeChuck is angry with you.