Hello readers and welcome to today’s post! Despite the title, this post isn’t about the inner workings of my imagination, but rather is a follow on from an article I wrote way back in October 2018 as part of Adventure Rules ‘Charming and Open‘ series, where I tackled a question along the lines of: ‘what video game would I turn into an anime?’. I found choosing one an interesting process and whilst I was thinking about it I realised that there is already a lot of crossover between anime and video games. Wanting to explore this further, today I’m taking a look at some anime’s which are based on video games.

This isn’t really a top 5 or anything like that, just some examples of anime’s I’ve seen that are based on video games. Strangely, I have only played a couple of the games in question so it will be really interesting to hear your thoughts on the way the anime’s compare to the games. Even stranger perhaps is that I haven’t seen the anime film based on one of my favourite ever games – Tales of Vesperia – so if anyone has seen it I’d love to hear more!

Anyway! Let’s get on with the list shall we?

As a big fan of the game (and someone who didn’t know this film was being made) I was thrilled to see it on the line-up at Scotland Loves Anime a few years back. In many ways the film is simply a re-imagining of the first Bayonetta game. It has basically the same story but changes a few things around and adds new scenes and dialogue. It is done in a different visual style to the game – much darker and moodier – and it is actually quite beautiful. I did not know this at the time, but according to Wikipedia this was the first piece of Bayonetta media to be originally voiced in Japanese (although most of the original English voice-cast from the game returned for the dub). I assumed that the Japanese version of the game would have had a Japanese voice cast as standard but apparently the English came first. I think there is enough variation in the film from the game that you will enjoy it even if you know the game inside out. It feels like a bit of a hidden gem in the world of video game films… now if only they would make one based on Bayonetta 2!

I have never played Ace Attorney (except a very brief go at one of the demos), and having watched and thoroughly enjoyed this show I feel that perhaps too many of the story-lines will have been spoiled for me to actually go back and play the games. The other way round though and I think this anime works perfectly. I am aware that it gets pretty bad reviews online, but I don’t really understand why because I absolutely love it! It’s hilarious, entertaining, the characters are likable and the mysteries are often intriguing (and regularly absurd). I also enjoyed a few of the theme tunes for this one, especially “Never Lose” by Tomohisa Yamashita which is used for the opening 12 episodes of the second series. All in all, I’d be happy recommending this to any Ace Attorney fan or anyone who enjoys courtroom dramas with additional comedy weather effects!

Having decided I would never get around to playing Persona 4 or Persona 4 Golden due to lack of hardware to play them on (not to mention lack of time), I was thrilled to find this series on Crunchyroll. This was one of my first glimpses into the Persona universe and it had me hooked straight away. It is a really good mix of serious (and often quite emotional) episodes and ones that are just plain silly. I feel it is all the better for combining these aspects. The characters grew on me just as any good characters from a JRPG should and despite its relatively short length I really felt like part of the world they lived in by the end. I was very sad to see it finish and even sadder to discover that another 25 episode series called Persona 4: The Animation exists but isn’t on Crunchyroll in my region! Hopefully one day someone will buy me the DVD as I would love to jump back into that world *hint hint* 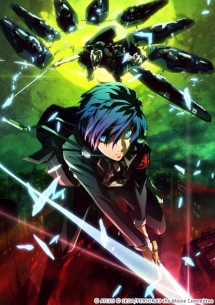 What’s this? MORE Persona? If you’ve spoken to me on social media (or possibly even in real life) recently you will know that I am currently playing Persona 5, so I decided to go Persona-to-the-max and check out the 4-part movie series adaptation of Persona 3. Now this is quite different from the Persona 4 Golden anime, which, although it has a good story and interesting characters, was really quite silly. Persona 3 The Movie however is a pretty dark watch (sometimes quite literally), with quite compelling themes and characters that I think will really stick with me despite never having played the game. The fourth movie especially (which I only watched a few days ago) is in parts quite difficult to watch as a feeling of utter hopelessness threatens to consume you. I don’t know how it compares to the feel of the game, but I would recommend this to anyone with an interest in the Persona universe.

Devil May Cry: The Animated Series

Whilst this isn’t necessarily the best anime adaptation I’ve ever seen, it still has a lot of Devil May Cry style about it. This one is a bit of a cheat in some ways, as although I assumed it was based on one of the Devil May Cry games I hadn’t played (2 or 3), it is apparently set between the first and second games and based on a manga series, but I think its connection to the game series is enough to include it here. It is pretty action heavy and really quite violent in parts – as I guess you would expect. Thankfully though it also features a lot of characteristic silliness (like Dante’s obsession with Strawberry Sundaes) and has just enough of a story-line to keep you going through some of the weaker episodes. I wouldn’t necessarily recommend it to people who aren’t already fans of the series but if you like the games I would definitely take the time to check this out.

I haven’t played Final Fantasy XV yet (Grr! Backlog!), but before watching this I had the slight misfortune of watching the movie Kingsglaive, which fills out the background and story of the game’s events, but unfortunately fails to entertain. I was therefore a bit hesitant about Brotherhood, but it is only 5 episodes long and so I gave it a go. Happily, I am very glad that I did. This is a short series with a lot of heart which fills out the backstories of some of the games’ main characters. Having not played the game, I don’t know how the characterisations compare, but if Prompto’s story in this is anything to go by then I’m definitely going to love him!

Again, I’m not arguing that this is the best anime adaptation of a video game ever made, but if you are a hardcore Tekken-head then I would still recommend it. It acts as a backstory to the series, primarily focused on the relationships between Kazuya and Heihachi and then Kazuya and Jun, but with plenty of input from other favourites from the Tekken universe. There isn’t a great deal else to say about it, except that it contains one quote that I absolutely love: “Now you will begin, this is your time! Reach for your own truth and never release it. Grab it with your own Tekken!!“. If you are really, really, REALLY into Tekken you could also check out Tekken: Blood Vengeance, although I warn you now you may be disappointed. I think there are also a couple of live-action Tekken films that I haven’t had the ‘pleasure’ of seeing, so do let me know if you think they are worth a watch.

So! What do you think readers – will you be checking out any of these adaptations? Are there any other video games that you would like to see in anime form? Have you seen Tales of Vesperia: The First Strike? Let me know your thoughts below!

17 thoughts on “When Video Games and Anime Collide!”