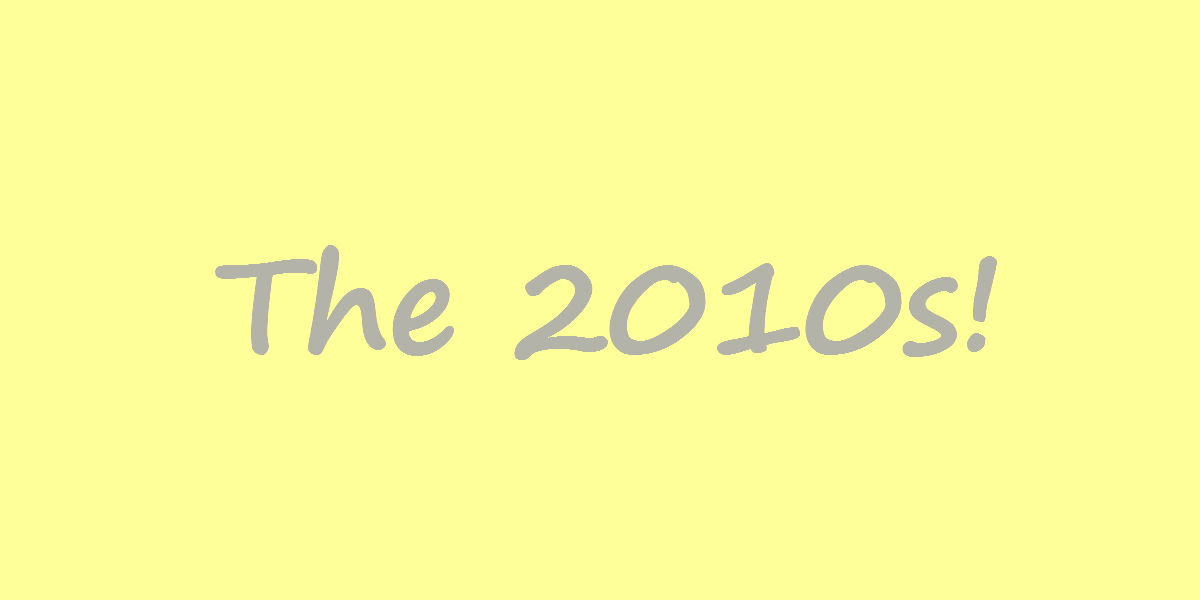 Hello dear readers! If you have been paying attention you will have noticed that we are quickly approaching the end of 2019. This is not just the end of a year but also the end of a decade. During 2019 I shook things up here at Shoot the Rookie by branching out into writing about anime. To celebrate I’ve put together a list of my favourite 15 animes from the last decade, so why not join me in diving into them!

This list took a great deal of time and brought with it many difficult decisions. In the end I decided to include both films and series as I didn’t want to create two separate lists. The other thing I’ve chosen to do is put them in order. Be aware that my ordering is not necessarily consistent with previous posts I’ve written, cos, like, I change my mind sometimes and lists are only ever really snapshots in time.

I’ve called this list ‘my favourite’ anime, rather than ‘the best’ anime or ‘the most influential or important’ because that is exactly what it is. I know there are a lot of big hitters not included but this is a list from the heart and I want to share these titles with you in celebration of the impact they have had on me.

Anyway, that was far too much babbling and you really just want me to get the hell on with the list before the decade is over, so here are my top 15 animes of the decade!!!!!

What is it? Loads of people get deliberately trapped inside a video game and thus begins a tale of heroism, technology, romance and tragedy.

Why do I love it? It is emotionally powerful, technologically interesting, contains challenging themes and in Kirito and Asuna it has one of the sweetest and most believable anime couples I can think of. It was also one of the first shows I watched after getting a Crunchyroll subscription and for some reason that means it has a permanent place in my heart.

What is it? A group of professional Ice Skaters compete to be the best at their sport and do some soul searching along the way.

Why do I love it? It is visually dazzling and emotionally compelling whilst actually feeling very true to life (in an over-the-top anime kind of way). The cast of characters is extraordinary and the unassuming romance which takes place in the background is just beautiful.

What is it? A parody series revolving around the exploits of a middle manager at a financial organisation led by an evil criminal overlord.

Why do I love it? It is deeply hilarious and unique in its unashamed parody of office culture. Set in the same universe as the brilliant Kaiji (which was not eligible for this list), it is the only anime I can think of which regularly features whiteboards, references to PowerPoint and bosses not being able to remember the names of their employees.

What is it? A girl who can control the sunshine meets a runaway boy with a decent head for business in a dark corner of Tokyo. World changing consequences ensue.

Why do I love it? Narrowly beating its predecessor Your Name into this list, Weathering with You is a compelling story with an ending which is delightfully morally ambiguous. Its cast of characters are the real story here, bringing together a group of people who are both believable and sympathetic, and its references to the climate emergency make it a modern day classic.

What is it? Comedic lawyer-ing based on the video game series.

Why do I love it? Its characters, its ingenious mysteries and its over the top use of weather effects make for a show which is both light-hearted and compelling. From tiny details (like the Judge always looking the same) to long-running story elements (like Mayoi’s heritage), it builds a world full of humour, drama and sometimes tragedy which I just want more and more of.

What is it? Again based on a video game, it features dark and intense action late at night and the usual cast of high-schoolers and their Personas.

Why do I love it? Its edgy, dark story and setting were a surprise even for someone familiar with the Persona series and its cast of characters somehow got into my mind and heart. At times its sense of hopelessness make it a difficult watch but I see that as an achievement rather than a failing and I most certainly couldn’t look away.

9. I Want to Eat Your Pancreas

What is it? A tear jerking exploration of an unlikely high school friendship. Bring tissues.

Why do I love it? Its emotional power just blew me away. It is a straight-forward story with few frills but it is in its simplicity that the story soars and your heart is captured by two teenagers facing very different journeys together.

What is it? Erm… the heroes of Dragon Ball Z fight against Golden Frieza? Oh and there is a cat god. And lots of desserts.

Why do I love it? It is one of the daftest things of all time. It is laugh out loud funny, action packed and just plain weird. Knowing nothing about Dragon Ball Z before watching this, I was impressed with the bright colours and fast action, but nothing prepared me for the cat god whose destructive intent can only be halted by providing him with desserts.

What is it? Four wayward Princes are tutored by a mysterious man who is frequently mistaken for a child.

Why do I love it? It is wholesome, heartwarming and lovely. The Princes are charming and awful in equal measure and the Tutor himself is a constant source of humour and goodwill. It features at least two of my favourite things (dogs and cakes) and also has a claim on my ‘Best Boy of the Decade’ award for the utterly lovely Prince Kai Von Granzreich.

What is it? Small town vampire invasion with excessive violence and a disturbing moral twist. Also somehow elegant and moving.

Why do I love it? It doesn’t do anything by halves. It is gory and violent as anything I’ve ever watched but manages to balance this by being extremely beautiful and having a story which is both terrifying and compelling in the way it makes us question our own moral values and reactions.

What is it? Firefighting on an epic scale but with better hair.

Why do I love it? The colours, the music and the general absurdity just blew me away. Promare really is the complete package (as long as you want something silly) with likeable and frequently hilarious characters and a fast paced story full of action and drama. It is literally ON FIRE.

What is it? A story of redemption, understanding and friendship.

Why do I love it? It just cuts so close to the bone. It is full of characters and situations in which you (or I at least) can see elements of yourself, both good and bad. Rarely do films evoke such powerful emotions in me and the ending, whilst in some ways inspirational, still haunts me to this day.

What is it? Super Heroes but where they are actually cool.

Why do I love it? It taught me that if done right the idea of heroes can be very powerful indeed. With its compelling and believable cast of characters, it is almost impossible not to take at least some of them to heart and its dramatic storytelling makes for the kind of show you can accidentally watch 10 episodes of in one sitting and still want to watch more.

What is it? A high schooler becomes the captain of a space pirate ship. Piracy, space wars and the world’s coolest high school club follow.

Why do I love it? There is just something awesome about a fun loving teenage girl becoming the captain of a pirate ship and managing to grow into the role. Combining the excitement of space piracy with an exploration of the young Captain’s relationships with a bizarre cast of characters (from both within and outwith the piracy business), Bodacious Space Pirates hits a real sweet spot.

What is it? A Princess discovers her true strength after fleeing her kingdom during a military coup organised by the man she loves.

Why do I love it? It is both extraordinarily touching and the perfect example of how people can struggle against all odds and yet somehow succeed. By putting together a small cast of very different characters it ensures that it never gets too cosy whilst also having the perfect balance of humour and emotion. The beauty of the animation is witnessed by the fact I own both artwork and have a tattoo of Yona herself and my only possible complaint is that they never went back to make another series, thus leaving us to rely on the Manga to complete Yona’s story.

So there it is! My 15 favourite animes of the 2010s! Any choices you find particularly interesting in there? Any omissions you absolutely can’t believe? Let me know what you think below in comments and watch out for my 15 favourite video games of the decade coming soon!

10 thoughts on “The Rookie’s Animes of the Decade!”