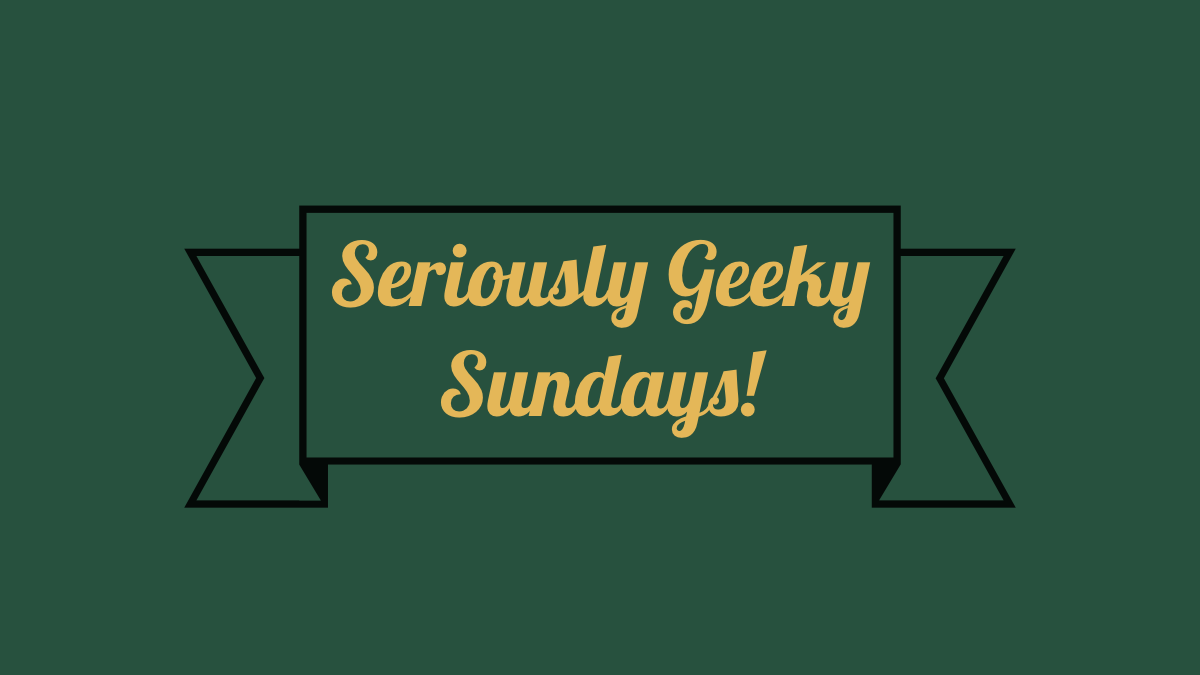 Hello dear readers and welcome to another Seriously Geeky Sunday here on Shoot the Rookie! Tomorrow is Geek Pride Day (which is a new thing to me!) and in celebration today’s questions are all about what it means to be a geek, so why not join me to find out about my own personal brand of geekiness!

As always I want to thank Heather over at Just Geeking By for creating this fantastic event. Today’s questions really got me thinking so I’m very grateful to Heather for giving me that inspiration. Anyone and everyone can take part in this so if you think you could come up with some good answers to these questions why not head over to the Seriously Geeky Sunday page to find out more!

Anyway let’s get on with today’s questions!

What is your geek origin story?

I have a lot of memories from when I was very young of discovering geeky things. My clearest memory is of being approximately 6 years old and watching the first episode of Star Trek The Next Generation at my Grandma’s house. I’d already played video games and had the Hobbit read to me numerous times by this point but this memory stands out because not only did Star Trek go on to be one of my favourite geeky things, but also because I distinctly remember questioning what ‘the bridge’ they kept referring to was. Up to that point ‘bridges’ were just things that crossed rivers and definitely had no place on a space ship.

What does being a geek mean to you?

I have to reveal the shocking truth here. I don’t consider myself to be a geek. The question is super interesting though as it got me thinking about why I feel this way. On consideration I think the reasons are two-fold. Firstly when I was growing up, my parents, my brother and sister and almost all of my friends could have been described as geeks. They liked sci fi, fantasy, video games, board games, everything. So it was normal to me and didn’t need a special term to define it. Secondly, my identity is based around the specific things I like and I find geek too general a term. I am a Star Trek fan, I am a Tekken fan, I am a Lord of the Rings fan, I am a My Hero Academia fan. I am a fan of lots of things and I enjoy being part of communities that surround each of them but I don’t really identify as part of a wider geek community.

How do you express your geeky side?

Whilst I may not consider myself a geek in an identity sense, I am in to a lot of stuff that fits into the geeky category and I like to make sure everyone knows it. I like to wear things that show off my love for my favourite fandoms including various clothes and jewellery, and I’ve filled my house with art and other objects that represent the fandoms I love. My biggest commitment to this is probably my tattoos that you can see above. My first tattoo was the Final Fantasy VII one which is a copy of a tattoo that the character Nanaki has on his leg. My most recent geeky tattoo was the Yona of the Dawn portrait. It took ages and hurt like hell but I couldn’t be happier with it. In between those two I got the other one which is the Blue Öyster Cult symbol. Being a 70’s rock band, they don’t necessarily get classed as geeky, but they have a massive sci fi influence in their lyrics and even once commissioned a sci fi author to write for them! I seriously cannot wait until lockdown is over so I can get more geeky tattoos and show them off to the world!

What are some of your favourite geeky websites and places to shop?

Oh my! There are so many that I don’t think I can mention them all but I’ll start off by saying that you can find many of them discussed in my Gamer’s Guide to Glasgow, so you should have a look at that for inspiration. To properly answer the question though I’ve decided to pick 3 places that aren’t in that article. In terms of physical shops, my favourite ever geek shop is probably Outland, which is situated on Kirkegate in Oslo. It sells pretty much everything a geek could need, with big sci fi, fantasy and anime sections and a huge selection of merchandise from all kinds of fandoms. Back when it was situated in Oslo’s Sentral Stasjon, it used to have weekend cosplay meet-ups and it would always make me smile to see people walking round the city’s main train station in full cosplay. My second pick is online geeky clothing shop Insert Coin, who have a huge range of high quality merchandise from many gaming fandoms. I personally wish they would stop making Persona 5 stuff before it leads me into bankruptcy! Thirdly I would pick FanFiction.Net. I’ve been using that site since my early teenage years to post and read fanfic and I still love it today.

Who are some of your favourite geeky celebrities?

This is a really difficult question but again I’ve chosen 3. First I’d pick cosplayer Yaya Han. Her cosplay is out of this world and she also seems like a genuinely lovely person whose anime suggestions I trust without question. Secondly I’m going to say Snooker player (and former Snooker World Champion) Neil Robertson. He admits he’s had some problems with it, but I was delighted to discover that in the past he was a big World of Warcraft and League of Legends player, and that these days he is super into his Warhammer. Finally I’m gonna pick guitarist Marty Friedman. Formerly a guitarist in Megadeth, he now lives in Japan and lends his crazy guitar skills to many anime soundtracks. He is even given a nod in one of my favourite video games – Tokyo Mirage Sessions #FE – which features a character called Barry Goodman who was formerly the guitarist in fictional American band Teradeth. Definitely not a coincidence!

Oh man, there are so many but I’m going to stick with my picking 3 strategy in an attempt to keep this post under ten million words. Firstly, and this will be no surprise to regular readers, I’m going to pick Adventure Rules. Ian writes in-depth gaming articles and covers a lot of games I am interested in. More than that though, his articles are well researched, easy to follow and funny, which in my eyes makes Adventure Rules the ideal blog. Secondly I’m going to pick the Drunken Anime Blog. It is by far my favourite aniblog because of Irina’s humorous and engaging writing and I often find new shows through reading the blog. Finally, and it is with sadness that I write this as I know the blog is not going to continue, but I’d like to give a mention to Normal Happenings. Matt is an excellent writer himself but the collaborations he has hosted over the years have brought the best out of the geeky blogging community and got so many people together in one place to talk about the geeky fandoms that have defined them.

So that wraps up another Seriously Geeky Sunday from me folks! Make sure you check out all things geek over at Just Geeking By and don’t forget to embrace your geekdom, whatever that may mean to you, for Geek Pride Day tomorrow!