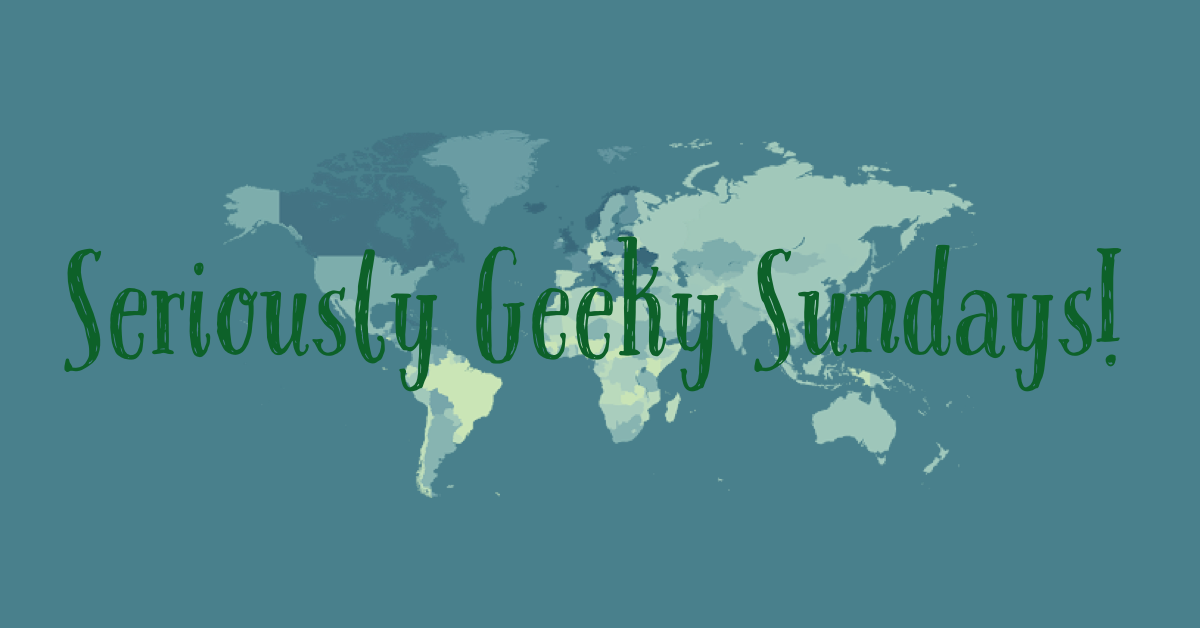 Hello dear readers and welcome to another Seriously Geeky Sunday! This week marks the start of an exciting voyage around the world, so why not join me to find out what location we’ll be visiting today!

Today’s prompt is a very exciting one, as it is the first of 8 prompts which each look at different parts of the world. Today we are talking about all things Western Europe, which just so happens to be the part of the world in which I live, so hopefully I can come up with some fun answers!

Big thanks to Heather from Just Geeking By for putting this event together and for coming up with this innovative prompt – I’m really excited to see where else this will take us over the next few weeks!

Now on with the questions:

Who is your favourite British character?

On the face of it Julian is a pretty stereotypical British character – a mix of smooth and geeky with more than a little arrogance. Normally I would hate that kind of character, however the development he goes through shows a much more subtle and interesting character who for me is defined by his ability to strike up unlikely but unbreakable friendships and his gentle but cynical view of the world.

Who is your favourite character from the Western European mainland?

Although Patrick Stewart is British, the character of Picard hails from La Barre in France where his family run a vineyard. He doesn’t speak much of his family but it is shown that he has quite a complex relationship with them in an episode where he returns home to a not entirely warm reception. We are so used to seeing the good captain flying through space that it is a really interesting insight to see him returning to France.

Who is your favourite Western European celebrity?

AKA the world’s best person, Sir David Attenborough has had a huge impact on my life for longer than I can remember. His wildlife documentaries have shown me unimaginable wonders and have made me who I am today in terms of my love of nature and wildlife. His determination to protect the natural world and make people understand its importance and beauty, even into his 90’s, is truly incredible. He is a legend who is beyond compare.

What is your favourite scene set in this region?

More Star Trek! Sorry! This time though a thoroughly ridiculous answer. Besides all of the terribly important and serious stuff the Voyager crew do, they also like to let their hair down on the holodeck every so often, and one of Captain Janeway’s favourite holodeck haunts is the Irish village of Fair Haven where she gets to romance a hot Irish guy whilst the rest of the crew wear silly costumes and pretend to be from oldy worldy Ireland. It is one of the silliest things I’ve ever seen in Star Trek, but I totally love it!

Western Europe is filled with history; which historical event, era or character to be featured in fandom has been your favourite?

Greek Mythology as depicted in Ulysses 31

French/Japanese animation Ulysses 31 translates the story of the Odyssey into a 31st century outer space setting with our hero Ulysses condemned by the gods to travel the universe in his ship (The Odyssey) in search of the Kingdom of Hades. It is obviously quite different from the original story, with our Ulysses having a whole crew of characters with him, but many familiar faces are there – Zeus, Poseidon and Hades for example all play their part, and Ulysses’ son Telemachus is actually there as a member of the crew. I’ve never studied the Greek myths but this show certainly made for an excellent introduction!

Choose one of your favourite fandoms to go on a trip to Western Europe; where do they go? What do they get up to? Is it business, pleasure or not by choice at all?

Screw Hawaii, the Persona 5 gang are now going on a real holiday and this time Morgana and Futaba are invited too! Each of the characters have quite different personalities though so what would they each find to do in the West End of Scotland’s biggest and best city? Well let’s take a look…

Ann would go for a stroll down Byers Road. She has quite the eye for fashion so would certainly enjoy the clothes shops you can find there. If she is willing to explore a bit further she could indulge her sweet tooth at Tantrum Doughnuts too!

Ryuji doesn’t necessarily like changing his normal routine that much, so I think he’d be most at home in Ramen Dayo, where he can get a cheap and delicious bowl of Ramen and act like he is back in Shibuya!

Haru is particularly green fingered so I think would very much enjoy a stroll round the Botanic Gardens where she could learn about a wide array of plants. If she fancied it she could enjoy a nice genteel cup of tea in the cafe afterwards.

Makoto is extremely studious and so where better for her to visit than The University of Glasgow with its historic buildings and ridiculously tall library? If she was in the mood she could even visit The Hunterian museum which is within the University’s grounds. I wonder if our favourite student council president might even decide she wants to study there?

Joker is a bit of an unknown, but if there is one thing we can say for certain about him it’s that he enjoys the many mysteries of coffee. Therefore where better for him to hang out than one of the world’s finest coffee shops, Artisan Roast? If he stays there long enough he might even be offered a job!

Morgana is also a bit of a tricky one, but given what happens to him in the game I think the place he would probably feel most at home would be exploring the Glasgow Subway…

Futaba would have the chance to exercise her technical wizardry at the Glasgow Science Centre. If the exhibits didn’t hold her attention she could stay after hours for one of the video game exhibitions that are often held there.

Finally we have Yusuke, and what could be better than a trip to the Kelvingrove Museum where he would get the unique opportunity to witness Salvador Dali’s Christ of Saint John of the Cross in person? Best of all it is free to enter, which would come in very handy for our young starving artist.

Then it’s all back to mine for video games, anime and sushi. Apart from Morgana. No cats allowed!

So there we are! Some of my favourite people, places and fictional experiences of Western Europe. But what about you? Maybe you are fond of some other notable European people or places? Let me know below in comments and don’t forget to head on over to Just Geeking By to check out all the other responses to this prompt!

3 thoughts on “Seriously Geeky Sundays: Around the World in 8 Sundays!”