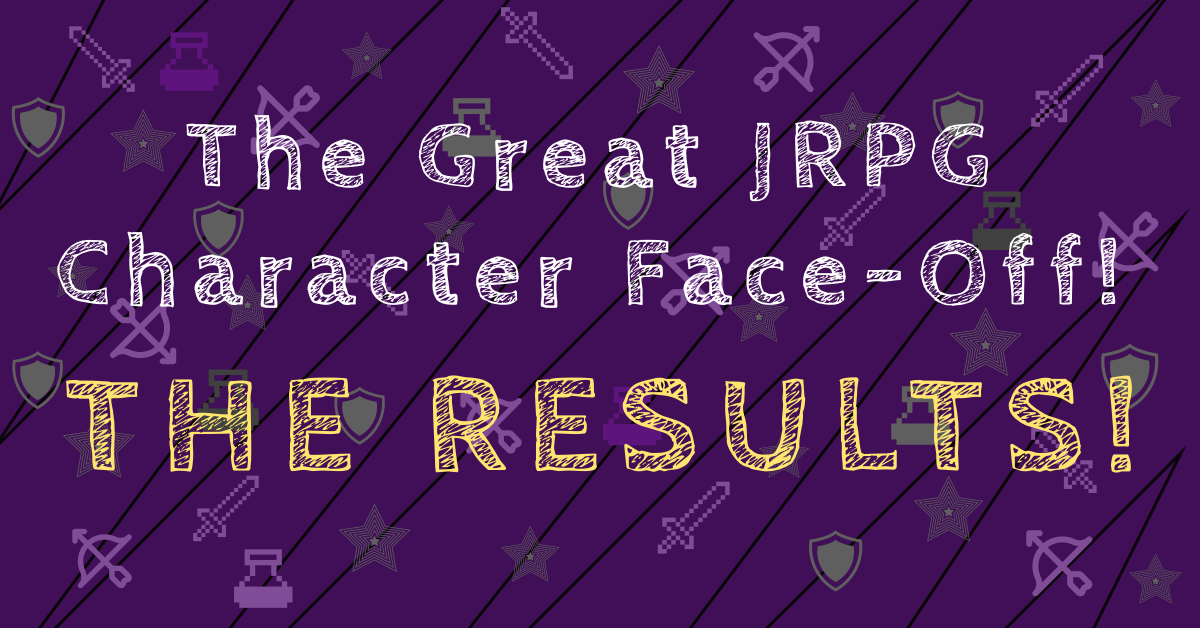 Hello dear readers and welcome to an extremely exciting day here at Shoot the Rookie! Yes that’s right, today is the day you have all been waiting for as me and the best blogging collaborator, Winst0lf, reveal the results of The Great JRPG Character Face-Off! So come join me as I reveal the community’s favourite JRPG characters as voted for by you!

Just in case you have no idea what I’m talking about, The Great JRPG Character Face-Off is a community blogging event in which me and Winst0lf asked you to submit your five favourite characters from JRPGs, which we would then add up to work out who the community’s overall favourites are. If you still have no idea what I’m talking about, why not check out Winst0lf’s wonderful introduction to the event in which he revealed his top 5!

The response we received to the event totally blew me away. We had more than twenty entries that flew in from all over the world. We had blog posts written for the event, twitter threads explaining people’s choices and loads of comments left on our posts featuring people’s own selections. I want to say a huge thank you to everyone who took part – it is you guys who have made this event what it is and I hope you’ve enjoyed being a part of it!

Receiving so many entries was super special and helped to give the final results a bit more weight. On top of that I want to say and extra special thank you to those who wrote blog posts to explain their choices. Six wonderful writers put posts together, and each was so interesting and unique, I would highly recommend checking them all out:

I hope you’ll agree that these are all fantastic articles and I am so, so grateful to each of these wonderful writers for their contributions to the event.

But what about the results I hear you cry?! Well to me they were actually pretty surprising and one of the things that stood out to me was just how many different games and characters were voted for, so before I actually give you the results, let’s take a look at a few random stats from the event!

Highest Number of Characters Voted For From a Single Game: 6 (Persona 5)

Highest Number of Characters Voted For From a Single Series: 23 (Final Fantasy)

Interesting huh? No? Anyone? OK, I guess at this point you just want to know who the winners are. Winst0lf is also revealing the winners right now over at the Winst0lf Portal, so make sure you check out his take on things too!

Four different characters from Chrono Trigger received votes as part of the competition, and Frog just pipped Magus to take the bronze medal with three votes. Chrono Trigger is the oldest game to make the top three and is clearly still very important to many players. I see Frog’s success in the competition as a celebration of all animal-esque JRPG characters, as Pinkie so eloquently put it “Frog’s journey to me is one of the most fleshed and present stories in any JRPG, even though he is a frog you can just feel what he is feeling”. Congratulations to Frog on this success, I hope he will hold the Masamune high in celebration!

This really surprised me! 23 different Final Fantasy characters were voted for, but Auron got double the number of votes than his nearest rivals. I have only recently played Final Fantasy X for the first time and I have to admit that Auron didn’t necessarily stand out for me, however I think Winst0lf put it best when he said that “he harbours one of the Final Fantasy series most fascinating backstories” and on top of that he “fights like an absolute beast!”. My feeling is that Sir Auron may not be terribly interested in coming second in this event, but congratulations to him none the less!

Massive congratulations to this adorable foul mouthed punk in being crowned the winner of The Great JRPG Character Face-Off! To say I was surprised by this is an understatement of some magnitude. Five other characters from Persona 5 received votes in the competition, showing what an absolute work of art the game is in terms of character development. I suppose in that regard it isn’t a huge surprise that Ryuji came out on top. Meghan from Meghan Plays Games described him perfectly as “the quintessential punk-with-a-heart-of-gold… loyal to a fault, utterly hilarious, and the best kind of vulgar” and I firmly believe it is a combination of these traits which has made him so popular. Congratulations Ryuji, you have finally risen to the kind of international fame you have always dreamed of!

So the young athlete has sprinted to victory and been crowned the community’s favourite JRPG character. Surprised? Well I was despite the fact Ryuji was one of my own picks. I was expecting a more classic character to come out victorious here. You know, a Tifa or a Cloud, or at least the leading character in a game. There are various possible explanations – not least that the release of Persona 5 Royal this year may mean the characters are fresh in people’s minds. However I like to think that the most obvious reason for his victory is the correct one – that Ryuji is the character that can appeal to the widest range of people and that he is in fact best boy. It warmed my heart when I realised that he had won as he has had such a rough ride that I thought he deserved this kind of acknowledgment, with no damn cats there to steal his thunder ❤️

That is pretty much it for The Great JRPG Character Face-Off. I hope everyone has enjoyed the event! Whoever you voted for I hope you’ll agree that the sheer number and variety of characters voted for in this event shows what an incredible video game genre the JRPG is and how much these characters mean to us, the players. Thank you to everyone who has read these posts, everyone who has taken part, and last but not least a HUGE thank you to Winst0lf for being such an awesome person to work with and helping to make this whole thing happen! Who knows, maybe we’ll be back at some point with another epic community event!

So that is that! The Great JRPG Character Face-Off is over! What did you make of the winners? Did any of your favourites feature? Let me know below in comments and don’t forget to check out Winst0lf’s results post for more JRPG fun and frolics!

22 thoughts on “The Great JRPG Character Face-Off: The Results!”

Follow Shoot the Rookie on WordPress.com
Join 471 other followers