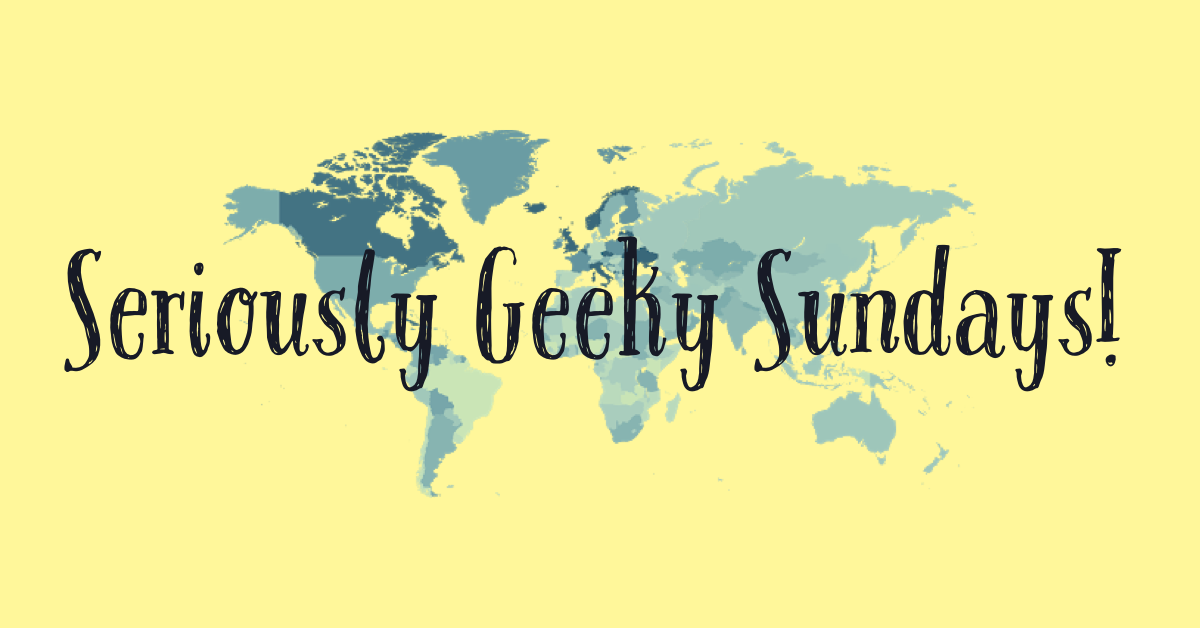 Hello dear readers and welcome to the final Seriously Geeky Sunday in the month of November! I know a lot of my American readers have just finished celebrating Thanksgiving, so it is only appropriate that this week’s questions are all about North America. Why not join me for a tour of my favourite geeky characters and locations in the region!

In this latest part of our geeky world tour we are looking at North America and some of these questions were particularly tricky to answer as over the years I’ve played and watched so much stuff set in the region. The USA does admittedly feature heavily here, but it was really awesome to see some questions about other North American countries and I was glad to have good answers for all of them!

Thanks as always to Heather from Just Geeking By for creating and hosting this brilliant community event, make sure you head on over to her site to find out how to take part!

Now onto the questions…

Who is your favourite Northern American character?

At first glance John could be your all-American hero stereotype. He has a nicely chiselled look and he talks about American sports, Westerns, comic books and cartoons. He has seemingly encyclopaedic knowledge of American culture, and yet somehow his frequent use of American motifs is shrouded in a kind of melancholy as he is stranded on the other side of the galaxy with a not-so-friendly group of aliens who couldn’t care less about Bugs Bunny. He frequently uses these cultural references to help himself understand the crazy world around him and even perhaps leans on them too much as his world and mental health descend into chaos. Crichton is no hero and America is no shining beacon that will help him and as the show goes on the references to his home country get sadder and sadder as he starts to realise he may never get to go home.

What is your favourite film set in North America?

This one was a no-brainer for me as The Voyage Home is not only my favourite film set in North America but also my favourite film of all time. Strangely for a series set almost entirely in space, my second favourite Star Trek film, First Contact, is also set in North America, which makes me wonder if the writers were somehow able to come up with better stories when the action takes place close to home. The Voyage Home is an utter joy of a film. A ridiculous time travel romp set in San Francisco in which James T Kirk and co travel back to the 1980’s in search of two humpback whales. I honestly couldn’t make this stuff up. It features a lot of interesting moments where the crew struggle with certain cultural aspects of the time period, and a particularly nice moment in the film is where Sulu talks about how he is actually from San Francisco, but San Francisco of the future. I love it and can quote it pretty much all the way through.

North American history features frequently in pop culture, which part do you feel is overdone and which do you wish was covered more?

So I don’t have a proper answer for this question. There isn’t anything I feel is overdone as I believe there is always room for new interpretations and I don’t know enough about North American history to know exactly what is under represented (although there are probably a lot of things!). Instead I want to answer this question by highlighting a film about North American history which I think is particularly good. That film is 2015 production The Witch, also known as The Witch: A New England Folktale, set in 17th Century America which deals with ideas of religion, witchcraft and, well, being absolutely bloody terrifying. The way it looks and sounds gives the film an incredible power and all the performances are compelling. It feels like you are actually watching the past and it gives an incredible vision of life during a time which is not often portrayed in modern film.

North America tends to be seen as mainly just the US and Canada, which other countries do you recognise in fandoms?

Mexico in Grim Fandango and The Caribbean in Monkey Island

These two LucasArts games sprung immediately to mind when I saw this question. Grim Fandango, whilst not actually set in Mexico, draws heavily on the idea from Mexican folklore of the Land of the Dead and the Day of the Dead festival, and much of its style is clearly influenced by Mexican art and design. Monkey Island on the other hand is perhaps not reflective of a specific country, but it is set on a handful of fictional islands in the Caribbean and contains various references to ideas which exist in Caribbean culture. Pirates of course is its main theme, and we all know a certain film franchise that might have gone to town with that idea, but Monkey Island also features quite a lot about Voodoo, and I suspect (although am not well-educated enough to know) that there may be many other ideas from the game which are based on Caribbean culture or folklore.

Although Hollywood is at the center of the entertainmen industry, the Canadian entertainment industry is blooming. What is your favourite Canadian production?

Apart from a number of bands and musicians, Due South was the only Canadian production I could think of but man do I love it. Telling the story of a Mountie who is forced to team up with the Chicago Police Department, it manages to be hilariously funny whilst also having very serious and emotionally compelling story lines. I absolutely adore pretty much every character (yes, even the second ‘Ray’) and the series has even helped me make friends, particularly at University, where me and one of my flatmates came up with a Due South drinking game whilst rewatching the series together. My only regret is that we never played it!

Broadway musicals are a national treasure in the US; do you like musicals?

Ok! How do I answer this politely? I don’t answer it politely? Ok then! I hate musicals. I absolutely loathe them, particularly the Broadway type. There was once a musical theatre group who used to play at my local theatre who produced their own musicals based around 60’s pop songs and because I loved the music I did enjoy them, but they are the only real examples I can think of. I guess I like The Muppets films but generally thought the songs were the worst parts. I’m not sure what it is about musicals but they just don’t work for me. I feel they have zero emotional power or something. The one musical that made it to Broadway I will say something positive for is Chess The Musical. I have never actually seen it and have no intention of ever watching it, however it is responsible for one of the best songs ever written – One Night in Bangkok – and therefore I will give it some credit. Check it out if you don’t already know it!

So there we are! A little geeky tour around North America! But what do you make of my choices? Perhaps you have your own favourite North American characters and locations? Tell me all about them below in comments and don’t forget to check out all the other responses over at Just Geeking By!

3 thoughts on “Seriously Geeky Sundays: Around the World in 8 Sundays – North America”