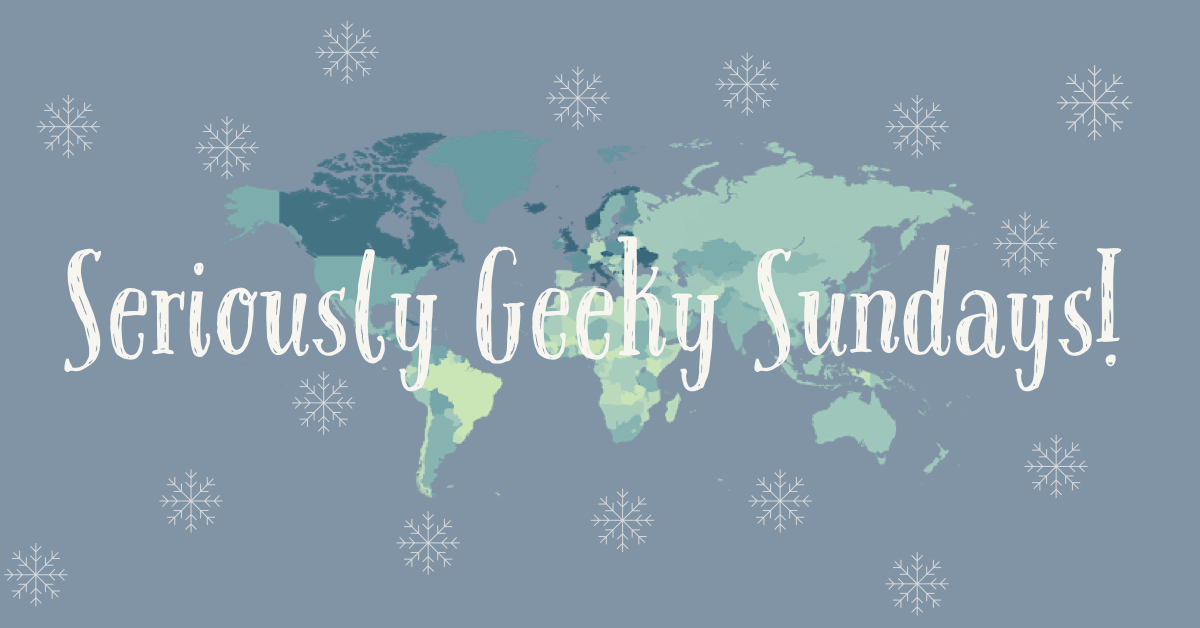 Hello dear readers and welcome to this week’s decidedly chilly Seriously Geeky Sundays post! We are once again embarking on our tour of the World and this week we arrive at Earth’s chilliest places. So why not come join me to learn all about the snowy and icy locations I love in fiction with a hint of Christmas added for good measure!

I have actually written before about my love of icy locations in video games so this was always going to be a fun one. Although I do love icy locations in fiction, in reality my feelings are quite different as I absolutely loathe icy conditions. That makes it all the more fun to think about these things in a blog post rather than having to go outside, so lets take a look at my picks! Remember also that you can check out future prompts and find out how to take part over at Just Geeking By.

What is your favourite winter themed fandom?

Being about a winter sport counts as winter themed right? This ice-skating anime took the world by storm when it appeared in 2016 with its stunning visuals, awesome theme song, utterly gorgeous romance and a life affirming story line about chasing your dreams. It even has a super cute dog! What more could you want? This show and its characters (not you Chris) really captured my heart and I would recommend it to pretty much everyone!

Shirase Kobuchizawa – A Place Further Than the Universe

Not an ice or winter character in the sense that she has special abilities or anything, but Shirase is obsessed with Antarctica to the point of being referred to as ‘Antarctica’ by some of her unkind school mates. After her mother died on an Antarctic expedition she makes it her goal to visit the frozen continent to discover more about her mother’s life. Despite her desire to go, no one believes she will be able to and she gets teased about having a dream like that, but with the help of a few friends she sets off to try and achieve her dream and learns the hard way what a massive undertaking it is for humans to visit and stay on Antarctica.

What is your favourite Christmas themed moment in a fandom?

Bit of a left field answer here but for this question I’ve actually chosen a song as my favourite Christmas themed moment. That song is High Gear by The Jon Spencer Blues Explosion. As far as I know the band don’t do any other Christmas songs (they actually might… but they are certainly rare!) and this one isn’t even billed as a Christmas song, but if you listen properly to the lyrics you will discover it is an unlikely Christmas gem, telling a story about the dangers of driving whilst Santa’s about… just give it a listen!

There have been many incarnations of Santa over the years; which has been your favourite?

This may be cheating slightly as he isn’t actually Santa, but I absolutely love the scene in Trading Places where Dan Aykroyd’s character dresses up as Santa to get into his former employer’s Christmas party and ends up stealing an entire salmon and getting absolutely wasted. It is actually quite a down part of the film, but is so utterly ridiculous that you have to laugh!

Which winter themed creature is your favourite?

Hee-Ho! Jack Frost and his more powerful leader, King Frost, are staples of several video game series made by Atlus including Shin Megami Tensei and Persona, and he is even referenced in Tokyo Mirage Sessions #FE. He is a cute little creature who specialises in ice attacks and is based on the legend of Jack Frost – a personification of frost and ice – which has seen many incarnations over the years in quite a few different countries. Jack Frost is pretty much the official symbol of Atlus these days, and they even make a plushie of him that I REALLY WANT!

If you could move to any snowy fictional place, which one would it be?

Genbu is one of the main Titans in Xenoblade Chronicles 2 and consists of a huge snowscape containing a lot of beautiful scenery and interesting ruins and stuff. The reason I’ve picked Genbu over other snowy locations though is that as well as the beautiful scenery it is also home to The Kingdom of Tantal and the city of Theosoir. As I mentioned earlier I’m not a massive fan of snow and ice, but having a comfortable base to come back to with shops and places to eat and drink and sleep makes it a lot better, plus I’d get to hang out with the extremely silly but easy on the eye Zeke von Genbu (Bringer of Chaos) and his lovely Blade, Pandoria.

So there it is! Some of my favourite snowy and winter themed fandoms and locations! But what about you? Do you have any favourite winter wonderlands? Let me know all about it below in comments and don’t forget to check out all the other responses to this prompt over at Just Geeking By!