Hello dear readers and welcome to something a bit different here on Shoot the Rookie. Back in 2018 I took part in one of the biggest and best collaborations ever created – The Games That Define Us – organised by the wonderful Matt from Normal Happenings. I’ve been thinking a lot about this and last year’s collaboration – The Characters That Define Us – and have decided to repost my entries here on my own blog.

Taking part in these two events was a fantastic experience through which I got to know a lot more about many of the bloggers I regularly read. I was very proud of both of my pieces and really wanted to have them both here on Shoot the Rookie so I thought I would repost them, starting with this one from The Games That Define Us. I hope you enjoy the piece and if you do I’d encourage you to take a look at all the other entries that were written for the event which you can find over at Normal Happenings complete with awesome musical accompaniments.

For now let’s jump straight in and take a look at what I wrote about the game defines me.

The game that defines me…?

What does it mean for something to define me? I pondered this question for quite some time before signing up for this collaboration.

There have been a lot of games that have meant a great deal to me. I have memories going back 30 years of playing video games and many emotions attached to these memories. But whilst they all have value to me, they do not necessarily define me.

So what then? If I am not content to look to nostalgia then the game that defines me must be one that has given me more than just memories. The only game which fits that criteria is Guitar Hero, or more precisely (maybe less precisely?), the Guitar Hero series.

My adventure with plastic guitars started with the first game, but that was just the beginning of a long relationship which is unlike my relationship with any other game.

It started back in my university days circa. 2005 when my flatmates had the game. I was a bit of a gaming recluse, refusing to play it in front of them for fear of looking stupid. One weekend they went on holiday and I dared to give it a go. No one could laugh at me if I was the only one there right? So I started with the opening track ‘I Love Rock ‘n’ Roll‘ by Joan Jett and proceeded to play through the set-list. To my surprise it wasn’t too difficult and it was great fun. I worked through the difficulties, learning as I went, and on my flatmates’ return I was no longer frightened of looking stupid. I’d taught myself how to play and could now enjoy it with them.

Inevitably life and Guitar Hero moved on. Guitar Hero 2 came out, quickly followed by Rock the 80’s and then Guitar Hero 3. During this time I moved back to the town I grew up in and spent most days at my partner’s house playing whichever Guitar Hero we were currently working through.

We had few responsibilities. No rent to pay, no serious job. Having always played on my flatmate’s version, it was exciting to get our own copy of Guitar Hero 2 complete with red plastic SG, and I’m not sure I’ve ever been more excited about buying a game than when we got Guitar Hero 3.

The excitement didn’t fade when it came to playing the games either. We would regularly sit up all night taking turns to work through tracks in our separate careers. We kept progressing, even if this sometimes meant hearing a song 10 or 20 times (yes Hangar 18, I mean you), but it was always fun and gave me a real sense of achievement.

There is one night I remember particularly clearly. It was a summer evening, and I’d  spent about 6 hours trying to do ‘Crazy on You‘ by Heart, one of the many bands the game introduced me to. Taking our eyes off the streaming coloured notes, we realised that the sun was bursting through the curtains. We downed tools and took a walk, strolling silently through the lanes in the summer sunshine, reflecting on how the morning’s silence was a beautiful contrast to the night of high volume solos and strumming. It is such a vivid memory because although it was simple, it was also perfect. I got to share this hobby with the person I love and I felt so happy doing it.

After some fairly major life events (moving to a big city, undertaking a second degree, getting my first permanent job) and some more installments of the series (including the absolutely dreadful World Tour for which I have never forgiven them), there came a time when the games’ importance to me became something different.

In the summer of 2012 me and my partner moved to Norway. I left a permanent job to go on a voyage into the unknown where I didn’t speak the language or know much about the culture. It was terrifying and exciting.

We lived in a beautiful little apartment with a coffee machine and views overlooking a fjord. At night the only sound was that of an occasional owl. There were woods, rivers and beaches all within easy walking distance – so different to the big city life I was used to.

Despite my appreciation of this new-found tranquility, it wasn’t easy getting to grips with having no job and not being able to communicate with people properly. I have never considered anywhere to be ‘home’, I don’t think I belong in one specific place, but here I felt far from the security that the feeling of home provides.

As time wore on I really started to notice how unhappy I had become. Not going to work and not knowing anyone except my partner who worked long hours meant I spent most of my time alone. I’m not a very sociable person, in fact I do my best to avoid most social situations, but I hadn’t realised the extent to which communicating with other people can help ground you.

I became increasingly frightened of going outside, scared not only of ice but also terrified of social interactions because of the language barrier. I tried to learn the language but was too scared to use what I’d learned and speaking English made me feel ignorant. I would sometimes sit for hours trying to work up the courage to walk to the local shop just to buy milk. Simple things became impossible mental struggles.

I frequently had panic attacks and although I tried exercise and giving up caffeine, it just wasn’t enough. I cried a lot and spent a lot of time staring at my phone in the hope someone would call just to say ‘hey’.

Sometimes though when times are bad we find things to attach ourselves to. Sometimes just having something to focus on other than our own loneliness can help us through the worst bits. And thus, there was Guitar Hero: Smash Hits.

By this point the Guitar Hero mania of the early 2000’s had faded, with the it’s (inferior) cousin Rock Band now the more popular choice. But somehow Smash Hits, with it’s collection of songs from previous Guitar Hero games adapted to be played by a full plastic band, was the perfect game for me.

Friday night became Guitar Hero night and we would play through our careers, swapping over song by song just as before. We played for innumerable hours, which culminated in the ultimate Guitar Hero achievement – completing the hardest song in the game – ‘Through the Fire and Flames‘ by Dragonforce on expert. OK, neither of us completed it singlehandedly, but by utilising the co-op mode with me on vocals and my partner on guitar we eventually got through it. This is my proudest achievement as a gamer. I don’t care if I had the easy part of the co-op bargain, it was team-work and I cannot imagine being more proud… 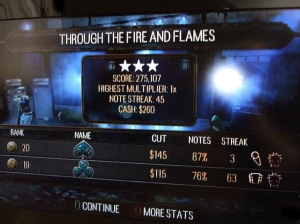 …unless I ever manage to 5-star all the songs in the game on vocals. You see, although it started as Friday night fun, I still had nothing to do during the day, and our combined success with ‘Through the Fire and Flames‘ convinced me that I could have a go at a vocal career in the game.

From that point on many of my afternoons were spent belting out rock hits. I don’t have a great singing voice but I can at least hit the notes, and playing through it on expert was actually easier than I imagined. Once I got to the end I wanted to go back and pick up stars, something which is very unusual for me in gaming.

I sang my heart out and loved doing it. Me and my partner even started playing songs outside Guitar Hero. I could feel the difference in my vocal cords from all the effort I’d put in. In the end I left the game at 234 stars – one short of all of them. The song that alluded me? Killer Queen! Well hey, that Freddie had a mighty fine voice! 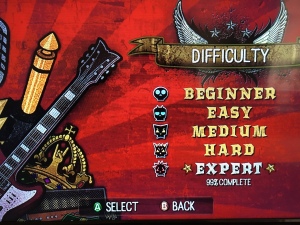 It has been several years since we returned from our escapade and I haven’t played a great deal of Guitar Hero since then, although I do have Guitar Hero Live sitting half-finished at home, but the fact that I didn’t manage to five-star Killer Queen sticks with me. It reminds me that if I ever find myself in that kind of situation again then I already have something to fall back on. I hope if things were to repeat themselves that I would be stronger or at least better prepared having learned from my experiences, but if not, ‘Killer Queen‘ will always be there.

But just as Killer Queen will always be there, I realise now that Guitar Hero is with me every day in the music I listen to. It isn’t just the game that defines me but it has also given me the music that defines me. I have always defined myself through music –  from wearing band T-shirts to putting gig tickets up on my wall. I’ve found more bands than I can name through Guitar Hero and seen more than 50 songs that feature in the game live, including Through the Fire and Flames. I even have a tattoo of one of the bands I discovered through Guitar Hero.

Most of my favourite games have deep stories and characters you can know and love, but I only enjoy those games as an outsider looking in. My journey with Guitar Hero though was about me. It has taught me that I am good enough, that if I try I can get there, that I don’t have to fear failure. It wasn’t a magic potion that could fix my problems, but it has been a crutch through a time when I felt despair, and an inspiration when I believed I was worthless. It has shown me music that feeds every emotion. It has strengthened bonds of love and friendship and given me a sense of pride and achievement, and although it has no story of it’s own, I have written my own story through it.

Plus I still have those dreams where you see all the coloured dots zooming past. Green. Red. Yellow. Blue. Orange.

So there we have it! I hope you enjoyed my piece and that you’ll join me again soon when I will be reposting my piece from 2020’s The Characters That Define Us collaboration.

3 thoughts on “The Game That Defines Me”