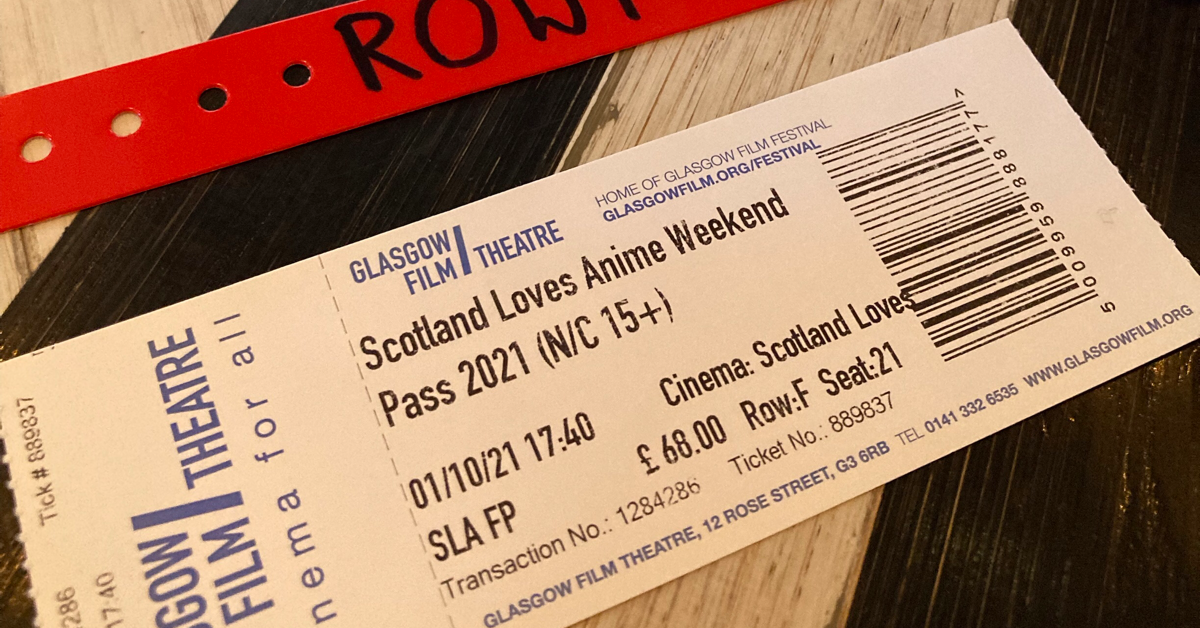 Hello dear readers and welcome back to Shoot the Rookie! Today on the site I am reviewing the Glasgow leg of the anime film festival Scotland Loves Anime which takes place in Glasgow and Edinburgh every year. There were a wide of variety of interesting films shown this year so why not join me to get some ideas on what to watch next!

The Glasgow leg of the event ran from 1st-3rd of October and featured eight films of vastly varying goodness. Here I’ll be taking a look at all of them, giving you an overview of what they are and what I thought of them as well as giving them a personal rating out of 10.

I know I tend to ramble on a bit, so for those of you who are low on time I’ve got a special guest writer featuring on this post who has written entertaining and/or informative four word reviews of each film. The writer mentioned is my partner and fellow Scotland Loves Anime veteran Sebg2258 who can usually be found posting about cooking and wildlife over on Instagram. Make sure you check out his page!

Anyway! Let’s take a look at the films shall we?!

If you are familiar with the Lupin III series you will probably know what to expect from this film, but what you might not expect is that it, for me at least, is one of the best in the series. Lupin III isn’t something I’m naturally drawn to but its over the top action and hilarious script made this one of my favourite films of the festival. If you like the idea of a less gentlemanly relative of Maurice Leblanc’s Arsene Lupin and a bunch of his weird but friendly criminal associates embarking on a fun and crazy thievery mission then this film is definitely for you!

This is the movie culmination of the Shirobako series, so going into it with zero knowledge of what had happened before wasn’t necessarily the best idea, but despite that I still got quite a bit out of it. Once I’d made peace with the idea I wasn’t going to remember the characters’ names, I found the premise interesting and enjoyed seeing in granular detail what goes on behind the scenes in anime production. It had a few laugh out loud moments and a few dramatic moments, but it was far too long and at points hard to follow. My overall impression was that it was an average film with the potential to have been much better.

Provided you are able to take the overall premise with a pinch of salt (and come on, this is anime), this is truly an excellent film. Full of heart, interesting characters and an easy to follow but compelling story, Pompo gets pretty much everything right. It manages to be incredibly funny throughout but not in a way that interferes with the weirdly relatable character stories. By the end I was rooting for absolutely everyone, even a character I’d written off almost instantly when he was introduced, and when the credits rolled it was hard to feel anything except joy. It really is a beautiful ode to film making.

Sing a Bit of Harmony

Bit of an odd one this. Not that I thought it was bad as such, but just that it didn’t do anything new and failed to hit the emotional heights of other high school anime. It had plenty of humour and an interesting premise, but that’s about all I can say. They could have done so much better with pretty much every aspect of it, particularly the main plot. There are plenty opportunities for it to be a great film, but in the end it is over the top and emotionally dry and relies far too much on musical numbers, which for me (as someone who despises musicals) was a big no-no.

On paper this doesn’t sound like a film I’d enjoy, but somehow it surpassed all my expectations. It is a story of a mother and daughter making a life for themselves after a series of unfortunate events. I had been concerned going in what tone the film was going to take, but they got it absolutely spot on. One area in which it excelled was its ability to develop the characters into well rounded people. People shaped by their backstories, people with interesting quirks, people who show their love in unique ways, people who do their best against the odds. Whilst perhaps not a classic, this was a really heartwarming film.

This is also a movie based on a series but this one is so well done that you need no knowledge of the original series to enjoy it to the full. The story is focused on three women who find each other through their mutual love of the anime series Magical Doremi and go on an adventure based around the series taking in both its locations and emotional themes. It is highly entertaining with likeable and relatable characters and makes the very important point that you should never completely let go of things that were important to you as there is always something to learn from them.

Knights of Sidonia: Love Woven in the Stars

Again, this film is the conclusion of an anime series I know nothing about, and this time I REALLY felt that. I had pretty much zero idea what was going on throughout and whilst it wasn’t awful, there isn’t one positive thing I can think to say about it. I guess if I had to say something positive, the sheer scale of it is probably the most impressive thing. Whilst watching it my mind wandered to other matters, like how I recognised a few of the voice cast from Tokyo Mirage Sessions #FE. That probably illustrates that it struggled to hold my attention and I wouldn’t recommend it to anyone who isn’t already a fan of the series.

So, a bit of honesty first. This film is definitely of higher quality than the Knights of Sidonia film, but I’ve marked it lower out of disappointment. Although I had a feeling I wouldn’t like it, I’d heard (albeit mostly from the distributors) that this was a critically acclaimed and powerful film. However, my experience was that it was a very dull affair that didn’t even manage to make the forests and animals that feature so heavily look good. It was high on violence and low on personality and without characters you care about it is impossible to tell the story they wanted to in a compelling manner.

So there we are! My review of all the films shown at the Glasgow leg of Scotland Loves Anime 2021! But what do you think? Have you seen any of these films? Maybe one of them caught your eye and you want more info? Let me know below in comments and I’ll be back soon with a review of the three films I’m seeing at the Edinburgh leg!

Follow Shoot the Rookie on WordPress.com
Join 468 other followers